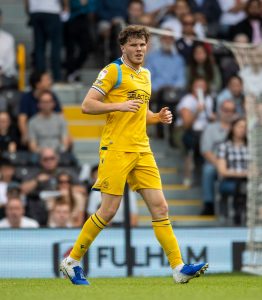 Everyone at Berkshire Youth was very excited when Tom came on board, and what a fantastic year it’s been! Tom has been a great champion for our charity, helping to raise awareness of our important work supporting, empowering and inspiring Berkshire’s young people.

Aware of the benefits of bringing quality activities and experiences to young people, Tom arranged for a group of young people to take part in the half time penalty shoot-out at Reading FC’s 150th anniversary match in February, and they absolutely loved it! He has also delighted young fans by popping along to some events, including a couple of football training sessions at a local club, where he took part in mini matches and presented awards to those who had raised the most money for Berkshire Youth this season.

“I have really enjoyed working alongside the brilliant staff and it is clear to see what such a fantastic job they are doing with Berkshire’s ‘next generation’. I hope that this year is the first of many for the relationship between Reading FC and Berkshire Youth and it has been an honour to be the first ever Charity Ambassador to come from RFC to help bridge that gap between two such important cornerstones in the Berkshire area.”

Julie MacLean, Marketing Manager, added: “We are thrilled to work with Tom. He’s a local lad and really genuine guy who the young people we work with respond really well to. Tom has shown huge enthusiasm for our work, is a great role model, and has been brilliant at amplifying our key messages about the importance of investing in our young people. We couldn’t ask for a better Charity Ambassador!”