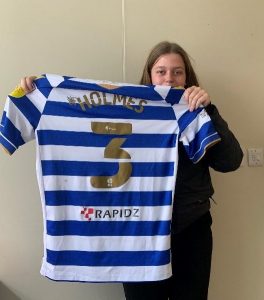 One of the young people we work with was over the moon with her special surprise!

You may recall that Berkshire Youth were lucky enough to take part in the half time penalty shoot-out during Reading FC’s 150th anniversary match earlier this season. This was organised by our Charity Ambassador, Tom Holmes. Tom was also generous enough to donate his match-worn shirt to Berkshire Youth!

After lots of thought, we decided to give the prized shirt to one of the young people who took part in the penalty shoot-out, who has been working hard with Berkshire Youth on a number of projects.

Youth worker Jessica caught up with the young person during a one-to-one session in school and handed Tom’s shirt to her.

The young person was chuffed: “This is sick! I wanted a Reading Football Club football top. Thank you!”